PREVENTION IS OUR BEST DEFENSE FOR CANCER.

THIS INCLUDES SUN AVOIDANCE AND AT LEAST ANNUAL FULL SKIN EXAMS WITH YOUR DERMATOLOGIST. 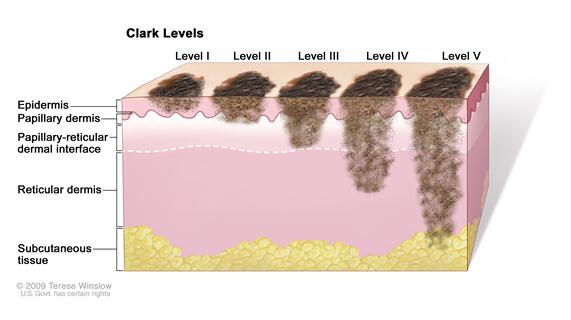 The only widely proposed screening procedure for melanomatous skin cancer is visual examination of the skin, including both self examination and clinical examination.

Description of the Evidence

Based on fair though unquantified evidence, visual examination of the skin in asymptomatic individuals may lead to unavoidable increases in harmful consequences. These include complications of diagnostic or treatment interventions (including extensive surgery) and the psychological effects of being labeled with a potentially fatal disease. Another harmful consequence is overdiagnosis leading to the detection of biologically benign disease that would otherwise go undetected.

Description of the Evidence

Skin cancer is the most common cancer in the United States, affecting more than 1,000,000 Americans every year. It accounts for more than 10,000 deaths annually.[1]

Skin cancers are easily detected clinically and are often cured by excisional biopsy alone. This does not mean that they are unimportant or can be neglected without adverse consequences. When neglected, they can be disfiguring and/or cause death.

Mortality from melanoma increased after the 1970s, especially in white males.[3,4] In the 1990s, melanoma mortality rates stabilized. In 2010, it is estimated that 68,130 individuals are expected to develop melanoma, and about 8,700 are expected to die of this disease.[1] In the United States, observed incidence increased 126% between 1973 and 1995, at a rate of approximately 6% per year,[5] though incidence rates appear also to have stabilized in the 1990s.[4] A study of skin biopsy rates in relation to melanoma incidence rates obtained from the Surveillance, Epidemiology, and End Results Program of the National Cancer Institute indicated that much of the observed increase in incidence between 1986 and 2001 was confined to local disease and was most likely caused by overdiagnosis as a result of increased skin biopsy rates during this period.[6]

The incidence of melanoma rises rapidly in Caucasians after age 20 years. Fair-skinned individuals exposed to the sun are at higher risk. The best defense against skin cancer is protection from the sun and ultraviolet light, though the effectiveness of sunscreens in preventing melanoma has been challenged.[7] (Refer to the PDQ summary on Prevention of Skin Cancer for more information.) Individuals with certain types of pigmented lesions (dysplastic or atypical nevi), with several large nondysplastic nevi, with many small nevi, or with moderate freckling have a twofold to threefold increased risk of developing melanoma.[8] Individuals with familial dysplastic nevus syndrome or with several dysplastic or atypical nevi are at high (>fivefold) risk of developing melanoma.[8]

The melanoma mortality rate in the United States increased by 1.7% annually between 1973 and 1990, then decreased or stabilized thereafter.[1] The changes in this trend in the 1990s might be due to prevention and/or early detection practices.

More than 90% of melanomas that arise in the skin can be recognized with the naked eye. Very often, there is a prolonged horizontal growth phase during which time the tumor expands centrifugally beneath the epidermis but does not invade the underlying dermis. This horizontal growth phase may provide lead time for early detection. Melanoma is more easily cured if treated before the onset of the vertical growth phase with its metastatic potential.[2]

Various observational studies exploring the possibility that melanoma screening may be effective have been reported. An educational campaign in western Scotland, promoting awareness of the signs of suspicious skin lesions and encouraging early self-referral, showed a decrease in mortality rates associated with the campaign.[4] No randomized controlled trials have been performed, however, to assess screening efficacy, though one randomized study is under way in Australia.[5] A case-control study of 650 cases (and 549 controls) diagnosed in Connecticut showed that skin self-examination was associated with reduced melanoma incidence. The authors estimated that monthly skin self-examination might decrease disease-specific mortality by 63%,[6] but the observed incidence effects may have been the result of study biases, which frequently affect case-control study designs.[7]

Differentiating between benign and malignant melanocytic tumors during histologic examination of biopsy specimens has been shown to be unreliable even in the hands of experienced dermatopathologists.[8] This fact undermines results of studies examining screening effectiveness and also may undermine the effectiveness of any screening intervention. Furthermore, this suggests that requesting a second opinion regarding the pathology of biopsy specimens may be important.[8]